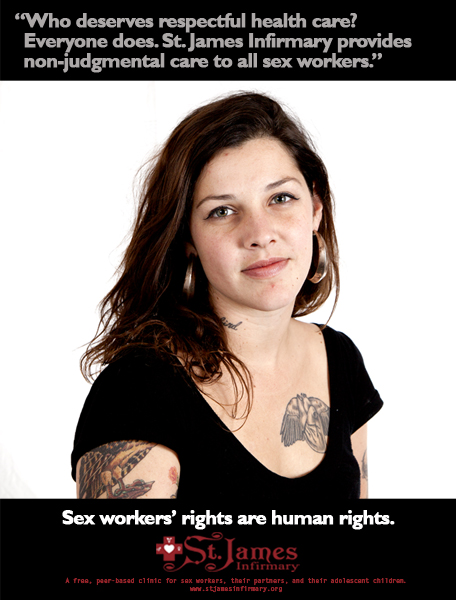 In October 2011, we launched the “Someone You Know is a Sex Worker” media campaign.  The campaign included a poster  on the side of 30 Muni buses for 4 weeks and the development of 6 agency posters for sale at conferences and on our webstore. This project is quite an achievement for the St. James Infirmary and for sex workers in the City of San Francisco.
The initial rejection of the campaign by CBS Outdoor and Clear Channel was actually a great opportunity for us to get increased press.  Our ad campaign and the controversy around the words “sex worker” got us four on-line articles, including the Huffington Post, and the NY Times, a report on ABC Channel 7 evening news, and a television interview with Stephany Ashley (who rocked it) on KTVU Channel 2 Bay Area People.  The biggest impact is that we all feel so proud of the work we do and having it highlighted in that special way really reinforces how amazing our clinic is.
Furthermore, our campaign was recently nominated by the Global Network of Sex Work Projects (NSWP) for a consultancy to the World Health Organization (WHO), in collaboration with UNFPA, UNDP and NSWP.
Stephany Ashley will be presenting the media campaign in Geneva at the end of January, 2012.  The consultation aims to identify and document programmes/strategies to address violence faced by sex workers in the context of HIV. This consultation is part of a process to develop WHO guidelines on HIV prevention, treatment, care and support services in lower and middle income countries for female, male and transgender sex workers and their clients. When published, the guidelines will include specific recommendations for health care providers as well as good practice in areas of community mobilization, human rights and violence against sex workers.

Congrats are in order to everyone involved, and lets wish Stephany Ashley safe travels and the best of luck in Switzerland.  Bundle up!