(CALL OFF YOUR OLD TIRED ETHICS)

Everybody knew about Margo, who was culturally influential at the national level and a local celebrity who burnished San Francisco’s reputation as a bohemian, free-thinking city. Known as hostile to both society’s treatment of prostitutes and to some feminists’ contempt for them, Margo had charisma galore.

There was much about Margo that I only later found out. Born Margaret Jean St. James in 1937 in Bellingham, Washington, she was raised on the family’s Golden West Dairy, located on the edge of the Nooksack River, a wilderness where bear, deer, cougar, raccoon, beaver, and a few wolves roamed. The eldest of 3 kids, Margo drove tractors, cleaned gutters, made hay and silage, milked 80 cows, and limed stalls. Her parents divorced and, when she was 8 or 9, her father remarried a “classic mean stepmom.” [cite movie Hard Work] Margo moved back with her mom and despite being wild in high school, she won a national contest for a watercolor painting. At 17, she married a local baseball player, gave birth to a son, and, realizing that she wasn’t cut out for marriage or motherhood and in desperation, moved to Seattle and then to San Francisco, where she planned to attend art school.

Describing the move to San Francisco, Margo wrote: It was St. Patrick’s Day in 1958 when I arrived in San Francisco via the bus from the Southern Pacific train station in Oakland to the Ferry Building. From there I went straight to North Beach via Veteran’s cab.

The cabby was a nice guy who helped me haul my 300-pound trunk up two flights of stairs to the small hotel over the El Matador and Waler Keane’s Art studio. He took me out for a cup of coffee and a small tour of the area without even making a pass although I was such a hick I wouldn’t have known if he did. My room was $30 a month. A wonderful Polish woman ran the little hotel and she and her husband became very protective once she remembered the musician who had recommended the place to me. She turned me on to the Green Valley Restaurant at 622

Green right down from Capp’s Corner where a five-course dinner was $3,00. And so at 21, I was all set to become a San Francisco artist.

It was a tight town for a newcomer; one had to start at the bottom for a job. I loved the big buildings, especially the PG&E, which was all lit up at night. I thought it would make a great watercolor. I strolled the streets and discovered several afterhours clubs where I got a job as a B-girl, met the night people and went to jazz clubs. Around the Beach I met folks at Enrico’s and the Condor who hipped me to Aquatic Park where I started working on my tan. The North Beach guys like Coke Infante hung there, played cards and gossiped. They called me the Joker because of my big smile —I showed a lot of gum. I didn’t care; I was accepted into the community.

I spent a lot of time on Upper Grant and the Coffee Gallery, the Bagel Shop, and fell in with the Beatniks. This was all before desegregation so finding hip places like Jimbo’s Bop City in the Fillmore and 181 Eddy in the Tenderloin was a reprieve. People could just listen to jazz and mingle while prejudice and the long arm of the law slept. I was getting around.

I noticed there was a new bar opening on Broadway, Pierre’s, so I put in my application. That’s when I met Dick Boyd and got into the world of jocks. I was happy to get the job since the after-hours clubs were becoming a thing of the past.

In “Time Without Work,” Margo wrote candidly of her decision to leave her marriage and child, “Later I figured out I was pre-orgasmic. They just didn’t talk about stuff like that twenty years ago. Maybe the lack of sex education is why I became preoccupied with sex.” [From Time Without Work: use at will]

Margo was the first female cocktail waitress at Pierre’s in North Beach. Creative and used to hard work (her dad had worked her “like a dog”), Margo designed the waitresses outfits, painted murals with a Montmartre theme, studied dance with Ruth Beckford, took painting classes at the Art Institute, shared a Vallejo Street apartment with Jim “Fergie” Ferguson, her first major love in the city, and was a significant player in Beat-era North Beach culture, a bohemian social experiment with an open code of conduct and a taste for the good life.

In the 1960s, Margo transformed from a North Beach bohemian to a hippie in The Haight, where she was at the gravitational center of everything groovy. She and guitarist Steve Mann kept a grand piano at their pad, an informal salon referred to as the St. James Infirmary. Frank Zappa, Dr. John, Ken Kesey, comedian, and publisher Paul Krassner hung out and listened to Jefferson Airplane, the Brothers and Janis, and the Grateful Dead. Margo went to Summer of Love Be-In’s in Golden Gate Park. Her hippie friends called her “the most stable of the beatnik/hippie types.”

In a still-later, late-sixties incarnation, Zelig-like Margo became housekeeper and chauffeur for author and Zen philosopher Alan Watts, who lived on a houseboat in beatific Sausalito. In A Vindication of the Rights of Whores, Margo wrote, “My politicization occurred over a three-year period, 1970-1973. I was living in Martin County, north of San Francisco, with a carpenter/musician, Roger Somers. I also socialized with the housewives who were participating in consciousness-raising groups. Elsa Gidlow, a lesbian poet, lived next door and used to push feminist literature under my door.”

In 1972, Margo, who did casual prostitution, invited friends to Watt’s houseboat, The Vallejo, for the first meeting of WHOM (Whores, Housewives, and Other Mothers), the forerunning of COYOTE, with the goal of bringing straight women and prostitutes together to work toward common goals.

Margo’s motivation to found COYOTE came when San Francisco’s recently-elected liberal sheriff, Richard Hongisto, “attended some of Roger’s and my parties. A former cop with a degree in sociology, he was recently divorced and a little afraid to let it all hang out in the City since the cops didn’t have much love for him; he preferred to party in Marin. I cornered him one night in the hot tub and asked what NOW* was doing for the rights of prostitutes since he seemed to have the support of the women’s movement and gay rights groups. He answered, ‘Someone from the victim class has to speak out. That’s the only way this issue’s going to be heard.’

“I decided to be that someone, even though I had worked only four years, and wondered about the effect speaking out would have on my life.”

I’d heard about Margo’s arrest for prostitution and subsequent

political revelations. At age 25, she was arrested for keeping a disorderly house in North Beach. Outraged, she devoted years and Herculean effort to get her conviction overturned. Because she’d never gone to college, Margo had to pass the College Equivalency Test before she could take law classes, which she did at night, while delivering court papers during the day for colorful bail bondsman Jerry Barrish and feisty leftist defense attorney Vincent Hallinan, jobs through which Margo met judges and other officials. She eventually won her appeal.

Margo’s experiences with the legal system, being charged with prostitution, studying law, and working in courts, all fired her up and prepared her for her career as a prostitutes’ rights activist. She said that she founded COYOTE in response to police treatment of prostitutes and to feminists’ contempt for them. At the time she founded COYOTE, she was in touch with the English Collective of Prostitutes and with Selma James, who’d recently founded Wages for Housework. Flo Kennedy, a black feminist lawyer and founder of the Feminist Party, who Margo said taught her to “kick-ass and “did the most to turn me out” (clearly meaning inspiring Margo as a political activist) and was a very early decrim advocate who explained that, “I just don’t see that women have such fascinating jobs, for the most part, that a job that pays ten times as much as most others should be outlawed.” [book: Color me Flo]

Before publicly announcing the founding of COYOTE, Margo wrote to her family in rural Washington State and asked for their support. Her mother Dorothy, who worked as an administrative assistant at Western Washington University in the Home Economics Department and was a community theater actress and director, was a staunch supporter. Margo’s sister, including Claudette Sterk, a gospel singer with 11 children, her sailor brother, salmon fisherman son, and their families all supported her. Her father never spoke with her again.

Margo’s mother was a lifelong fan, who thanked Peg (as she called her) for being a “daughter that everyone loves—except for a few bigots who don’t like anyone!” Dorothy could even philosophize as provocatively as her famous daughter: “I wonder how it would be if men and women lived together only during their fertile years and then dissolved the relationship. Sometimes, men hardly seem worth the trouble.” In another letter, she apologizes for her husband’s bad moods and calls him “a jerk.”

On Mother’s Day, 1973, Margo St. James founded COYOTE, the first prostitute’s rights group in the U.S. The Reverend Cecil Williams was an early supporter and the first Hooker’s Ball was held at his Glide Memorial Church in 1974. With Margo’s wit and infectious enthusiasm for decriminalization, COYOTE became a national darling praised in The Atlantic Monthly, which wrote that “no public relations expert could do more for prostitutes than Margo St. James has done with COYOTE.”

A bootstrapping genius, Margo managed to score access to “a copy machine at the Gas and Electric Company, which sat by itself in a small room on the 8th floor. During lunch hours for two years, I dressed as a secretary and ran off the material necessary to be a successful rabble-rouser.”

Margo described her life at COYOTE: I talk on the phone twenty hours a week, and working about eighty ours a week—living in the office, because on $40000 I can’t really afford an apartment or a car. I ride a three speed bicycle. I don’t have facilities in the office to cook or shower. I joined the YMCA, so I can go there at midnight and shower any time I want. I like going to my lover’s apartment at night  There’s no phone there so I can’t do any work and I’m forced to take a vacation.

My time is strictly self-centered. My work is my center, not the relationship.  This is not true of most women, who are into making the relationship the center of the universe.

I would never fake it with a lover; that’s work. And I would never have a relationship with someone where I had to pretend that he was better than he is. I found that as a hooker I enjoyed equality with men—not in public but in private.

I work very hard. I laughed when an interviewer asked about my personal life.  “I don’t have any personal life to talk about,” was my answer.  [From Time Without Work: can use at will.] 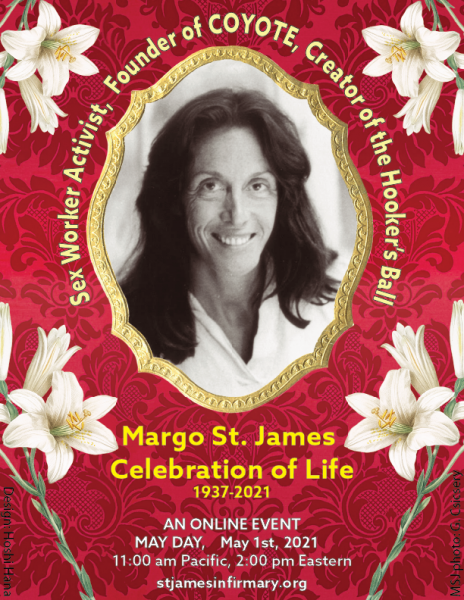