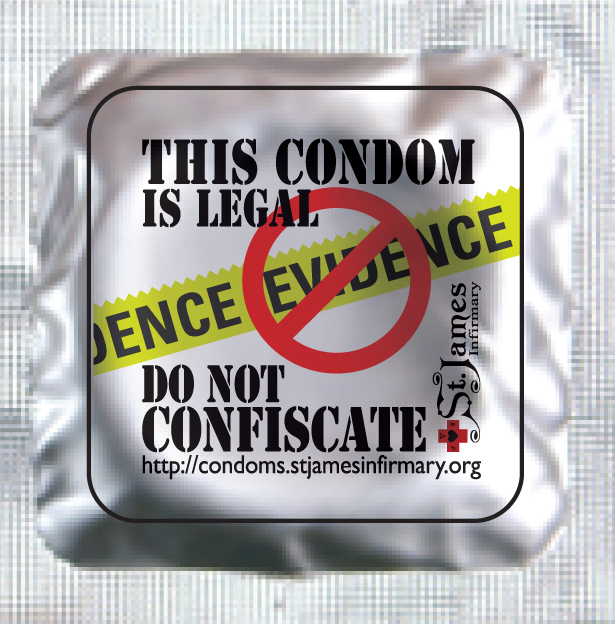 In many cities across the US, possession of condoms, condom wrappers and conversations about safe sex are used as evidence against sex workers to justify arrest for prostitution and prostitution related charges.

The routine use of condoms as a tool to violate our basic human right to protect ourselves from HIV and sexually transmitted infections, as well as prevent unwanted pregnancies, is unjust and counter to sound public health.

Prior to 2013, San Francisco was one of the many cities using condoms as evidence of prostitution and related charges.  For nearly  7 years, the St. James Infirmary was urging city officials to end this practice.  At the July 2012 International AIDS Conference in Washington DC,  The Human Rights Watch released a report chronicling this absurd practice in four cities:  New York, Washington DC, San Francisco and Los Angeles.

The Full report can be seen here or the Summary & Recommendations as a PDF are available here in Spanish or English.

(The condom featured in this post was created by our volunteer graphic artist, Rachel Schreiber, to raise awareness about the issue and in protest of the criminalization of condoms and safe sex against sex workers)

The report by Human Rights Watch was instrumental in helping the St. James Infirmary raise awareness about the use of condoms as evidence.  The Bay Area Reporter published an article discussing this issue in San Francisco and highlighting how difficult it is for sex worker rights activists to advocate for change when various officials are completely ignorant about the practices occurring in their own departments. The article was critical about the use of condoms as evidence and raised concerns about the lack of clear leadership from the San Francisco Police Department (SFPD) and San Francisco District Attorney’s (SFDA) office.

In early June, 2012, St. James Infirmary was visited by the Director of UNAIDS, Michel Sidibe.  During this visit we presented Michel Sidibe and members of  UNAIDS with our statement and asked Michel Sidibe to write a letter to the Mayor of San Francisco and the US Obama Administration urging them to end the harmful and unnecessary practice of using condoms, photographs of condoms, or discussions of condoms or safe sex for prostitution or prostitution related arrests. You can read the UNAIDS Michel Sidibe Letter of Support.

In late 2012, The San Francisco Human Rights Commission helped to organize a meeting in collaboration with The Human Rights Watch and St. James Infirmary to invite various City policy makers (SFPD, SFDA, AIDS Office, etc) and stakeholders to discuss permanently banning the use of condoms as evidence.   This led to a 90-Day Evaluation of Condoms as Evidence by SFDA‘s office and an intent from the SFPD to issue a department-wide bulletin denouncing the confiscation of unused condoms as evidence.  The evaluation was eventually extended to 180 days.

In April 2013, after the 180 evaluation period, the SFDA has agreed to not use condoms as evidence or prostitution any longer, and the SFPD has issued a department wide bulletin to go along with the new policy, to not use condoms as evidence of soliciting or loitering in prostitution related cases. This is a huge victory for our community.  Thanks to everyone at Human Rights Watch, the Human Rights Commission, the SF AIDS Office, the SFPD, SFDA and the Public Defenders Office for supporting this new policy.

You can also read the official SFDA letter Condoms As Evidence 033013 and the SFPD Department Bulletin on Condom Policy to permanently end the use of condoms of evidence in San Francisco and possibly use them in your city to help advocate for policy change.

St. James Infirmary has also been working to get the use of condoms as evidence banned at the State level.  In November of 2012, St. James Infirmary along with Human Rights Watch and the Harm Reduction Coalition met with State Attorney General Kamala Harris’s office to ask that a statement be issued by the AG condoning the practice of criminalizing condoms by using them as evidence by police and in court cases throughout the State.  We were denied this letter by Kamala Harris’s office at this time.  The AG would not agree because they still want the option to use condoms as evidence of sex trafficking.  Our position is that the practice of using condoms as evidence in sex trafficking cases will actually increase the risk of trafficked victims to exposure to HIV and STIs along with unwanted pregnancy. Our position is to protect victims first, worry about prosecution secondary and with use of other evidence.

Also at the State level, Tom Ammiano attempted to introduce bill AB 336 which states that possession of condom(s) shall not be used as evidence of soliciting or engaging in prostitution (AB 336 – Fact Sheet – Condoms As Evidence).  However, this bill was problematic for many reasons and is currently not recommended by the St. James Infirmary in it’s current version.  We will keep you posted to any changes.